Uyless Black is the author of forty books and hundreds of essays and journal articles. He graduated from the University of New Mexico with a degree in Psychology. He completed graduate work in computer systems at American University and the Stonier Graduate School of Banking at Rutgers University.

As an officer in the U.S. Navy, Black was awarded the Navy Commendation Medal for his service in Vietnam. He also served as an intelligence officer at the Defense Intelligence Agency, where he worked with computers to classify and disseminate information on Soviet and Chinese military systems. Later, he designed systems simulating naval engagements between U.S. and Sino/Soviet fleets. While working at the Federal Reserve as a software developer, he wrote the first computer program that simulated the nation’s money supply. During this time, he published a landmark article on the use of Gestalt psychology in the design of software code.

Black was one on the first writers to publish books about the Internet and its architecture, and spent several years conducting lectures around the globe on Internet protocols. The prefaces of several of his books draw analogies between wild life and communications networks (see picture), and have attracted many comments from readers. He founded several companies specializing in advanced communications technology. He served as an Assistant Director, as well as ombudsman, for the Federal Reserve Board, and Senior Vice President at the Dallas Federal Reserve Bank. 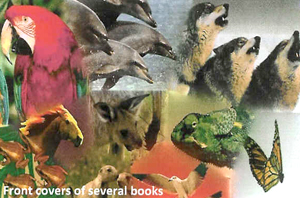 He is the author of Your On the Street Reporter series, essays on the life and times of modern America. He has also written The Light Side of Little Texas, a humorous look at a young boy growing up in America’s southwest. This work was awarded the best book of 2012 by the Historical Society of New Mexico for its depiction of domestic life in the southwestern United States. Black is also the author of A Swimmer’s Odyssey: From the Plains to the Pacific, a memoir about his love of swimming and his service in the Vietnam War. He has written The Nearly Perfect Storm: An American Financial and Social Failure, a book about the 2008 financial meltdown and its aftermath. His book, 2084 and Beyond, is a treatise on human aggression. He recently finished Digital Societies and the Internet: What the Present is Bringing to the Future, a practical guide on how to exploit the power of the Internet, as well as an analysis of what the Internet holds for its users in the future.

He continues to write parody and social comment on the goings-on of the most interesting species on earth: the human race.

He recently finished The Cepee Dialogues: A Modern Fairy Tale: a satirical treatise on humans' inability to control their pointless, violent aggression.